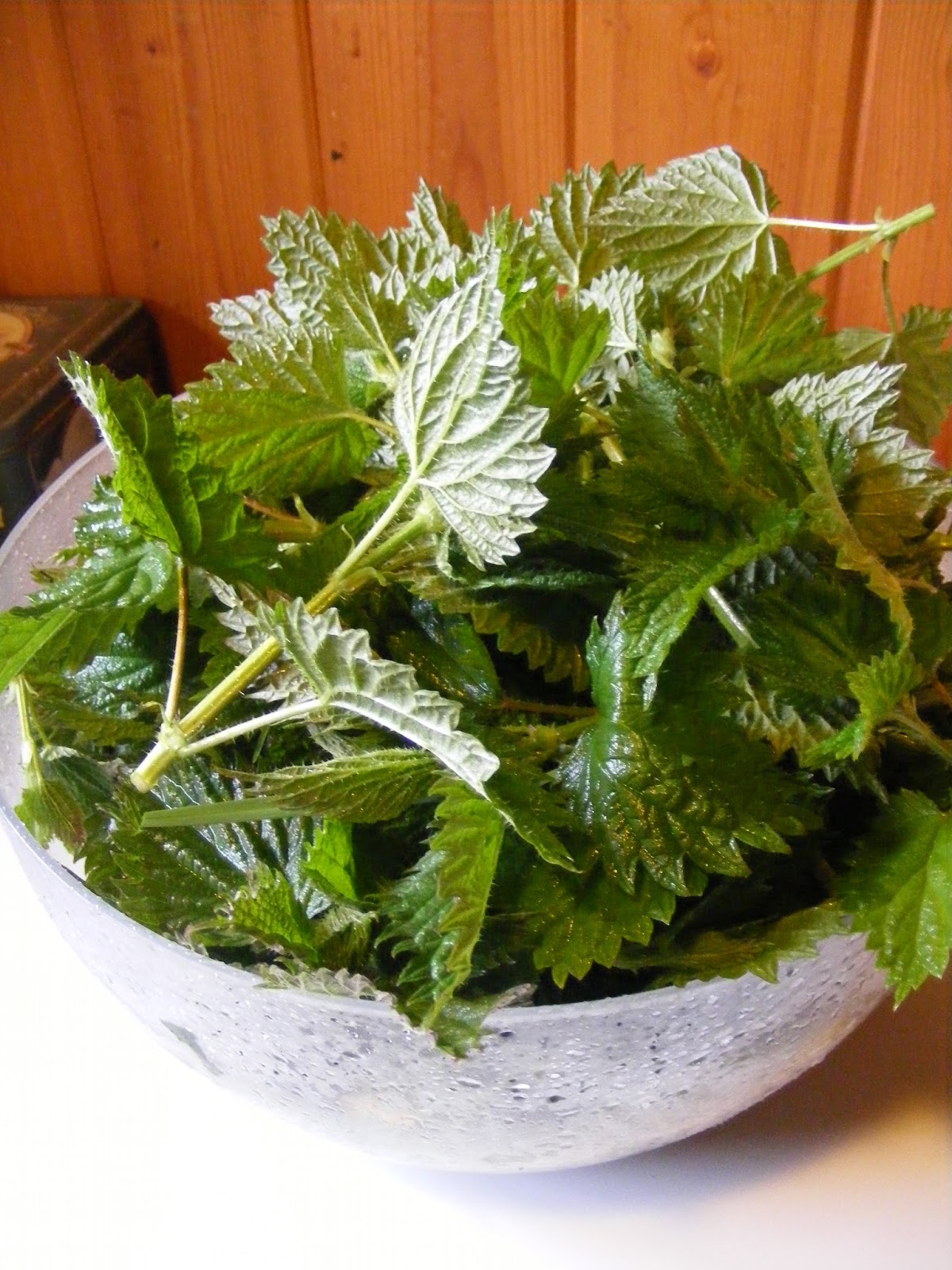 It’s really finally spring here. The green things are growing, the bugs are buzzing, the frogs chirping and the birds are starting to appear again. One of my favorite things about spring, actually the reason I love spring so much, is all the foraging that becoming possible again!
Stinging nettles are one thing I hadn’t ventured into yet and wasn’t so sure that they were something I wanted to “venture into" either.

Ariana at And Here We Are posted about nettles just recently. Looking through the photos I realized we had a patch growing along a fence line on the farm right here by the stable.  I had thought they were nettles before but they didn’t sting when I touched them so I figured I must have been wrong. I promptly forgot about them just like the prune tree.


After reading Ariana's post I went to investigate again.
Youch!
They stung me this time. I think they didn’t sting me the first time because it was raining and there was so much water on the plant it kept the sting causing compound from getting on my skin.
I’ve since learned they are very much worth the stings and work required to eat them! I used them in eggs, made nettle pasta and used the broth in soup and as a warm hearty drink. 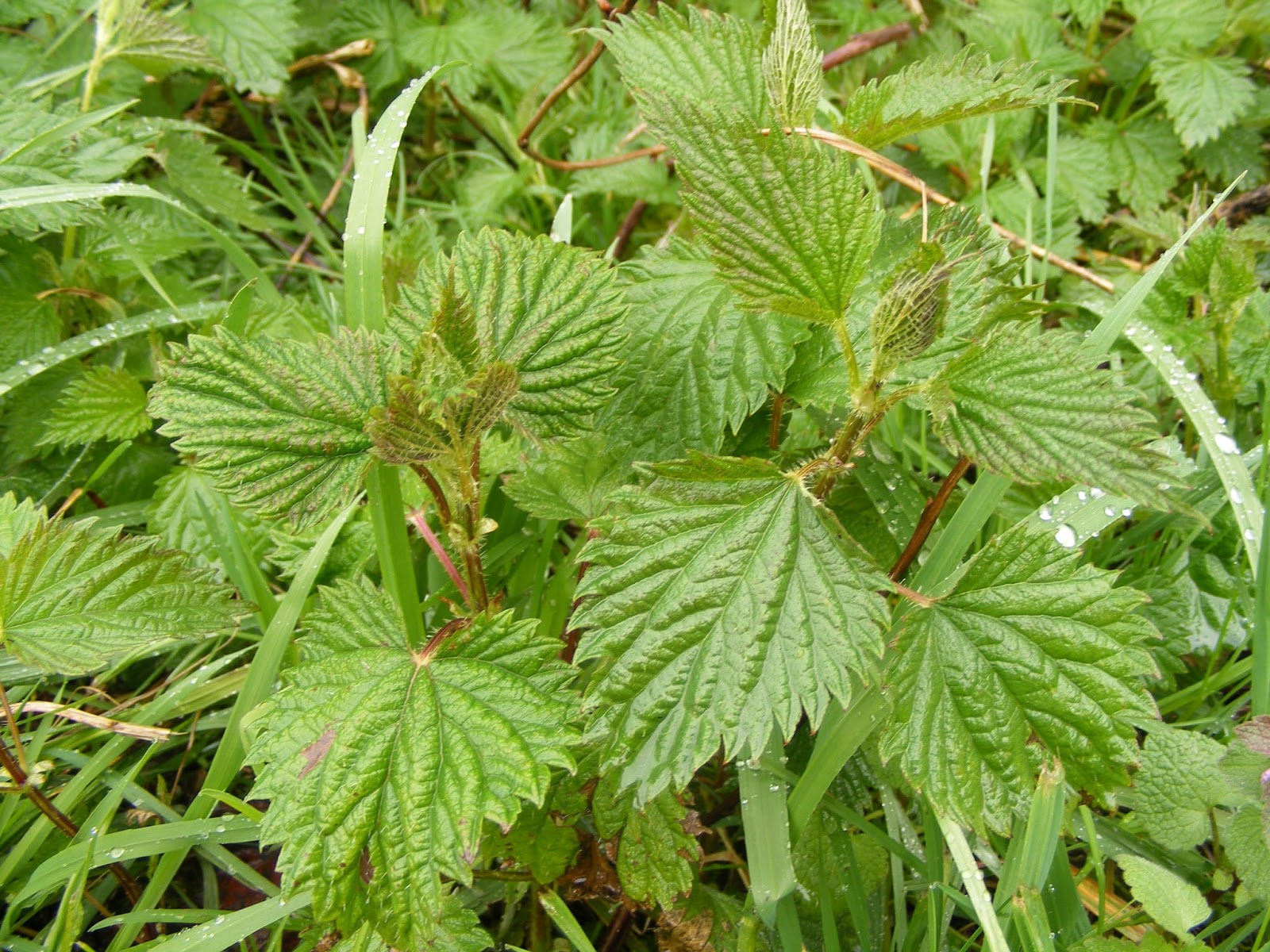 AJ  thinks the broth tastes like squash, I have to admit it sort of does. Nettles are very high in beta-carotene, just like squash, so its not surprising that the broth might have a “squashy” taste.  You can use the blanched green just like you would kale, spinach or any other green that holds up well to cooking.


Nettles are all around nutritious, they are a super great source of vitamin K and all sorts of important stuff as well as used in homeopathic medicine for allergy relief, kidney and adrenal health and in helping wounds heal. This article has additional info about all their awesome benefits if you’re interested. 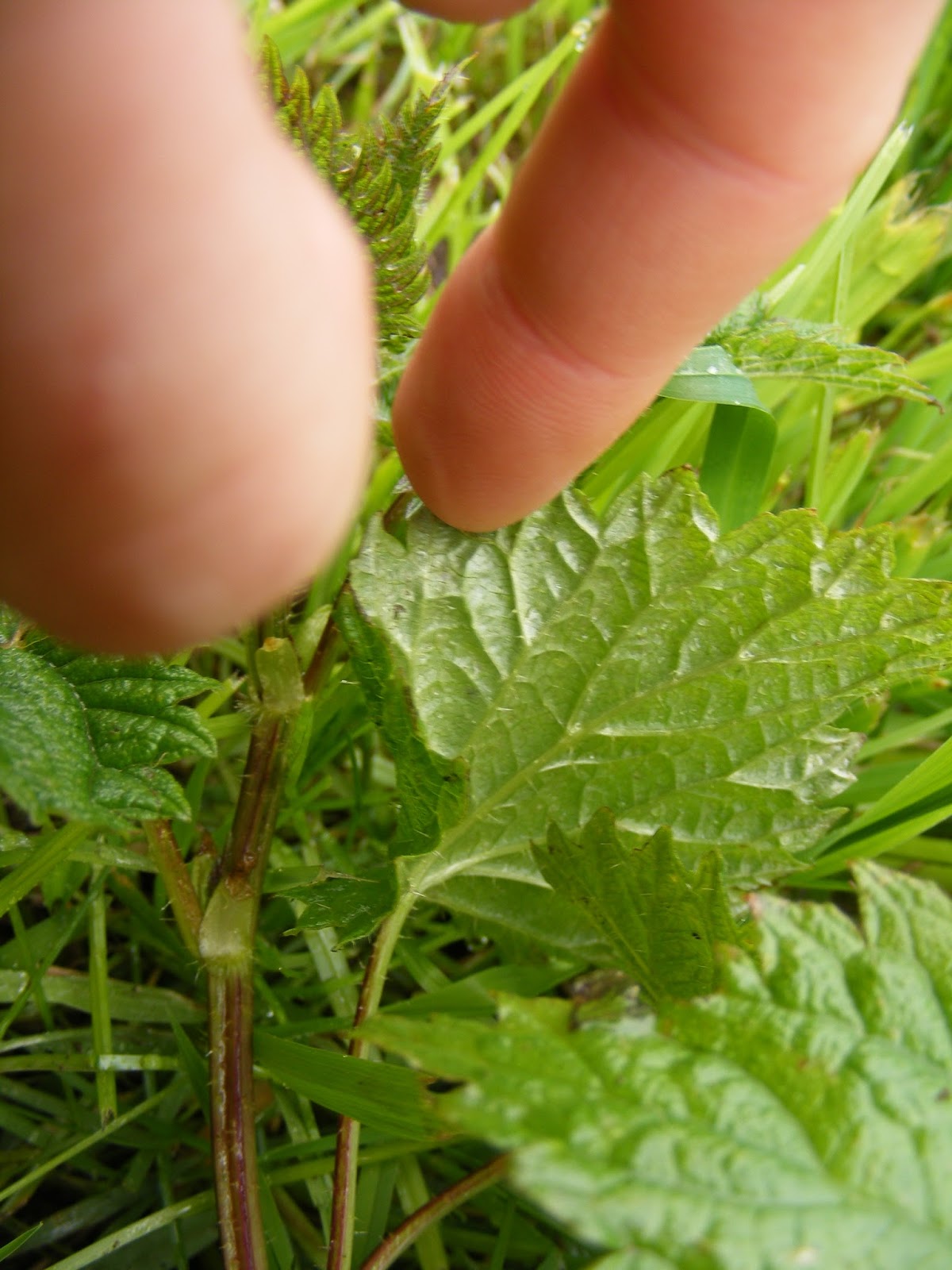 Stinging nettles Urtica dioica, have subspecies native to North America as well as Europe and can be found as an introduced species in other places. They can vary quite a bit in different growing habitats but there are a few defining characteristics:

Sting
Yeah. Goes without saying right? Of course you don’t want to have to figure out a nettle is a nettle this way. And they there are other edible nettles that don’t sting. Good grief I sound like Doctor Seuss. 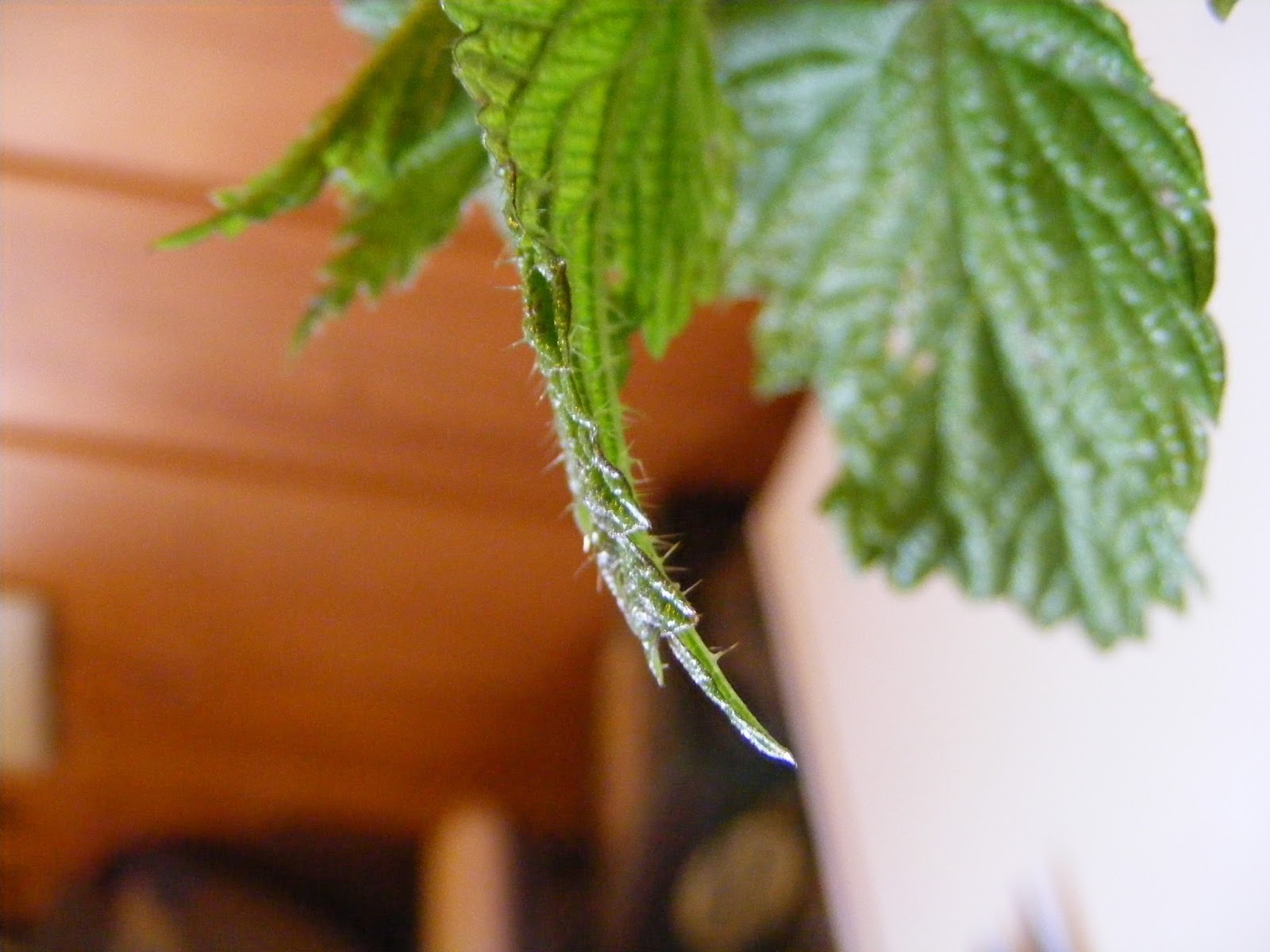 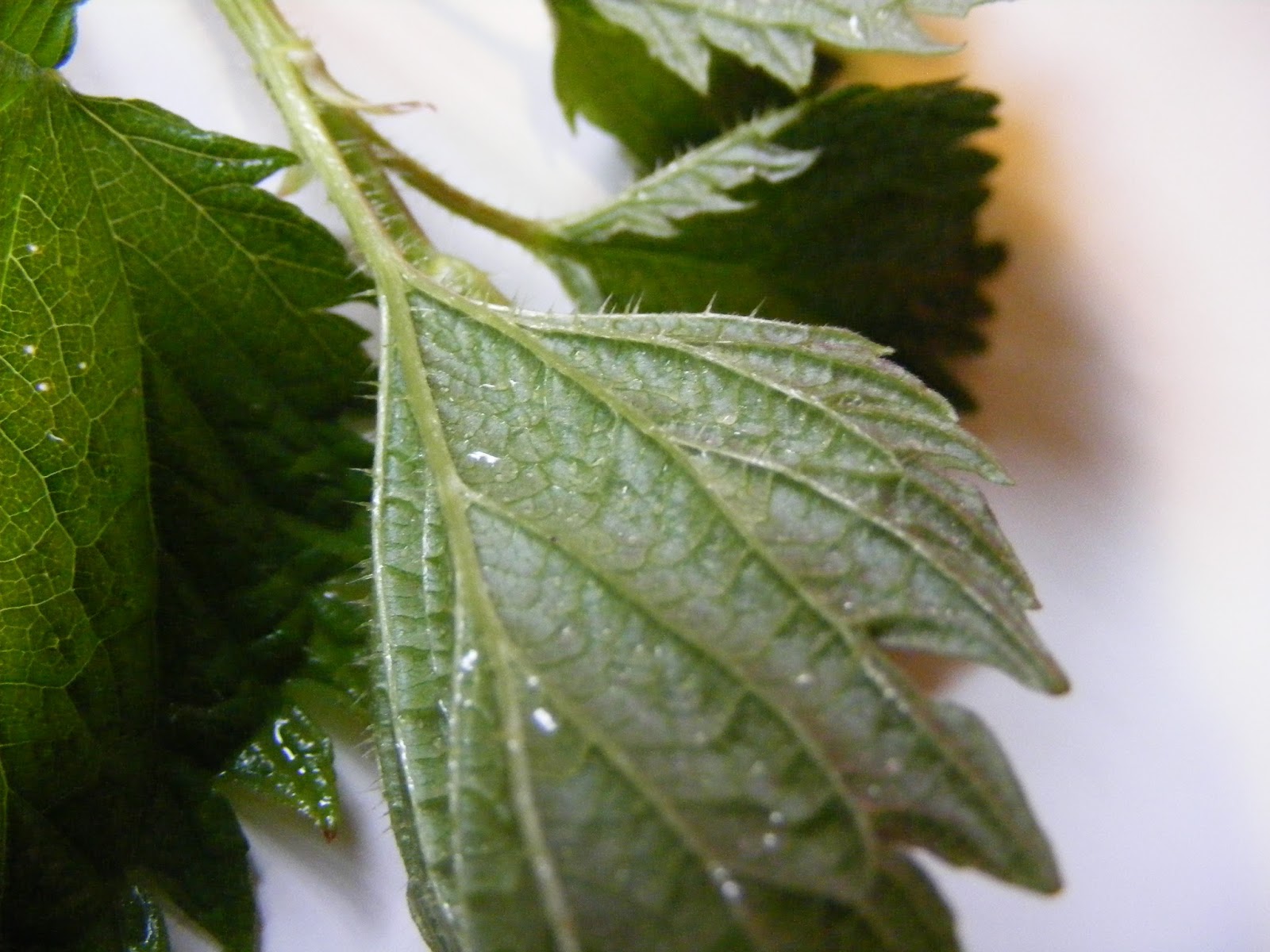 The sting is caused by trichomes, the little hairs on the leaf that shoot you up with a nasty cockatiel of plant chemicals that causes an inflammatory response.

Whoever said plants were innocent never met a stinging nettle.
Or a rose.
Or any of the plants people use as drugs.
They produce those compounds to kill bugs! Seriously, we are just the idiots who think its fun to poison ourselves with plant chemical weapons.


They have a square stem that will be either pithy or hollow depending on the age of the stem, getting more hollow as the plant ages. 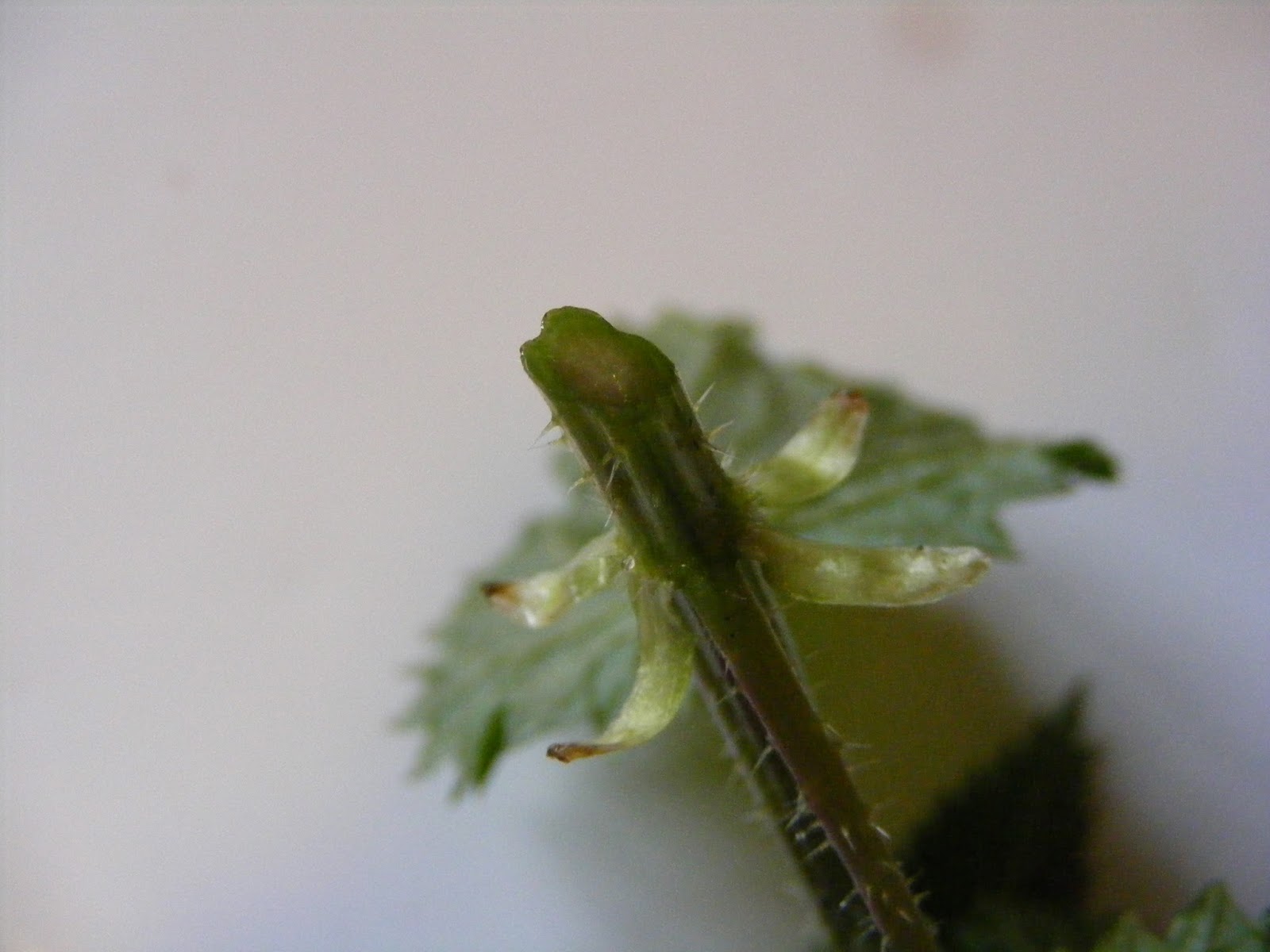 Leaf
Leaves are opposite (meaning they are organized so every leaf has a buddy right across the stem from it) and deeply serrated.There also have stipules at the base of each pair of leaves, they are those little mini leaves where the stem and leaf connect. 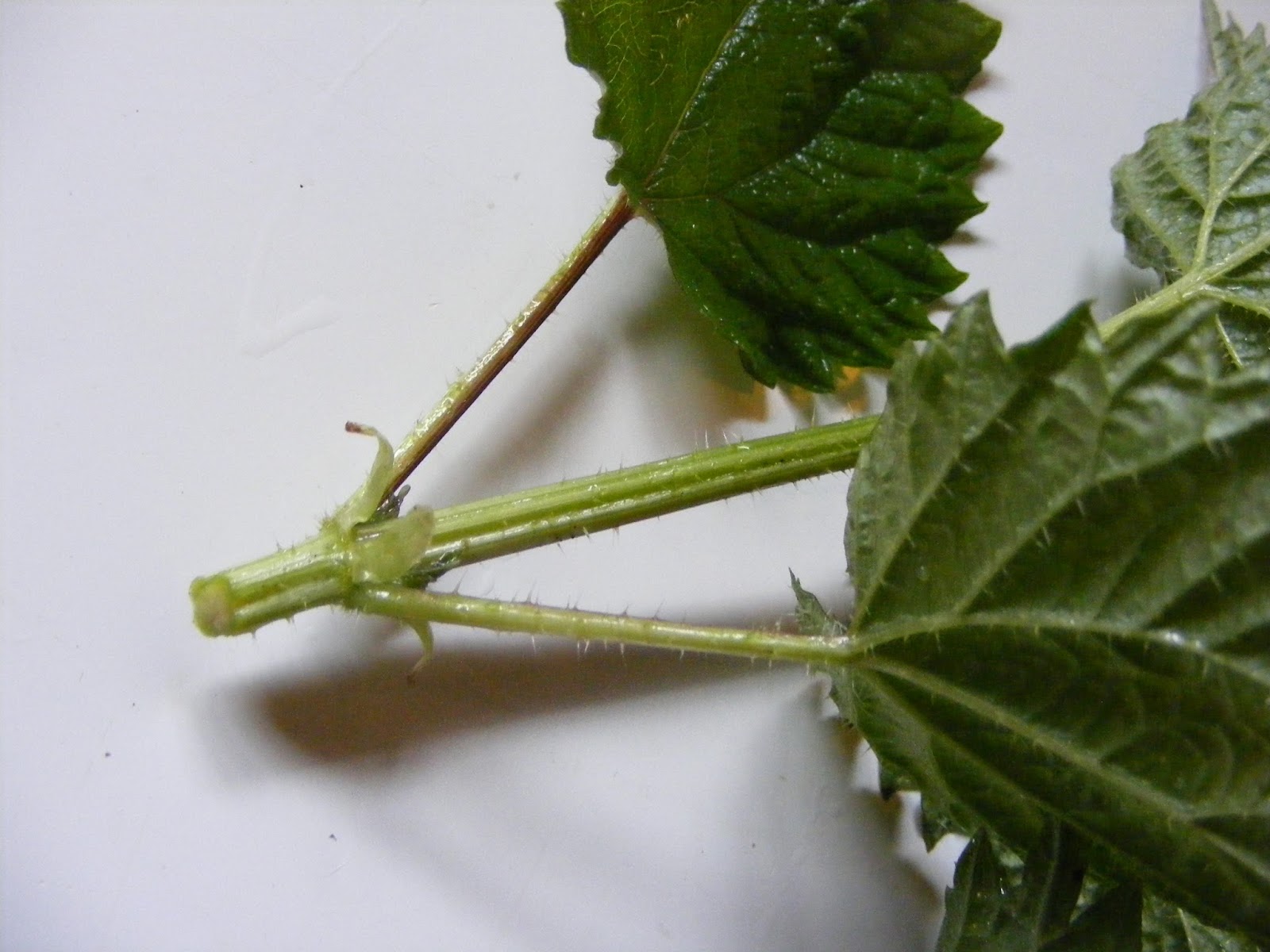 Our nettles have very heart shaped leaves but they can also be more narrow and pointed. 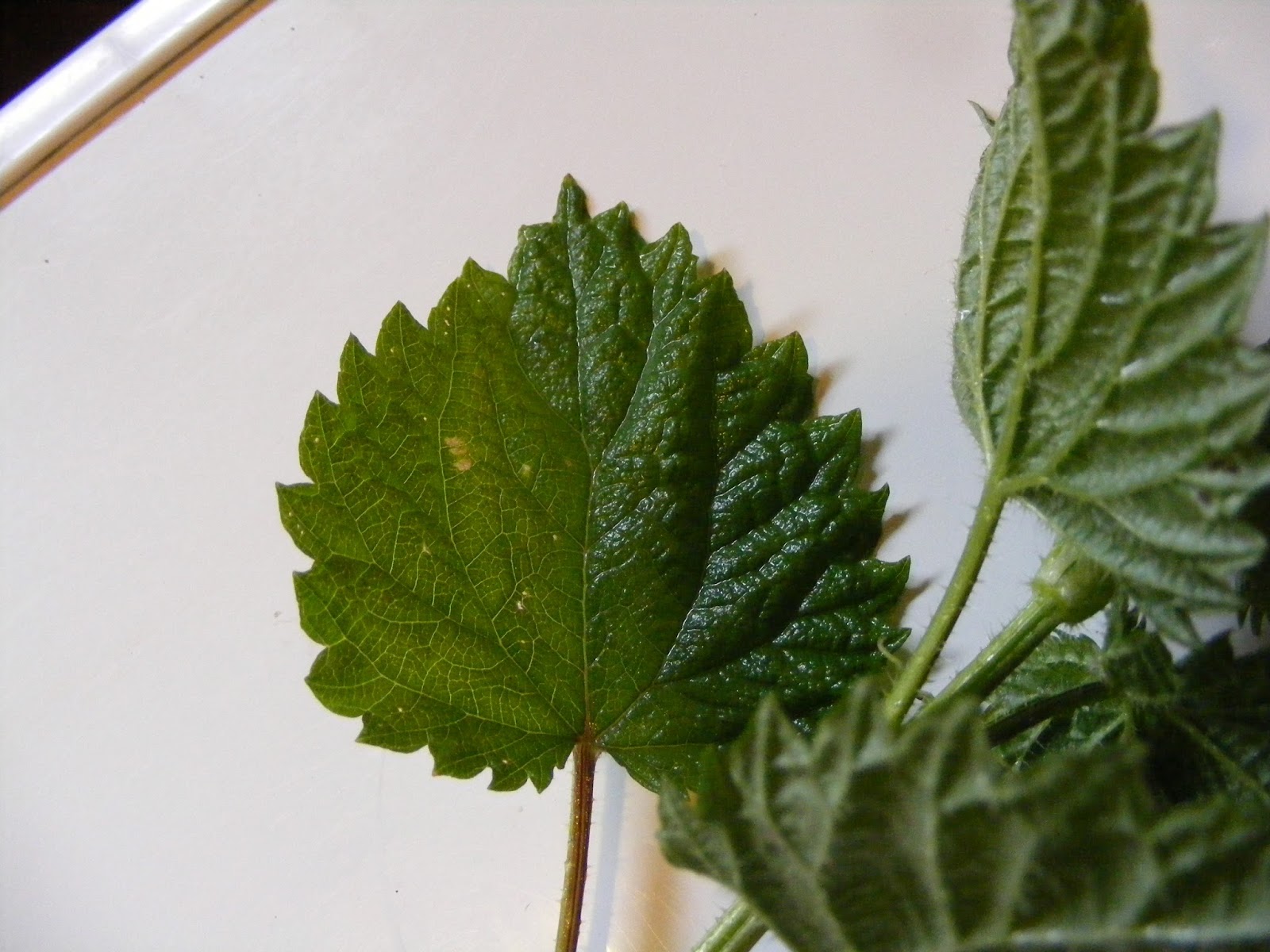 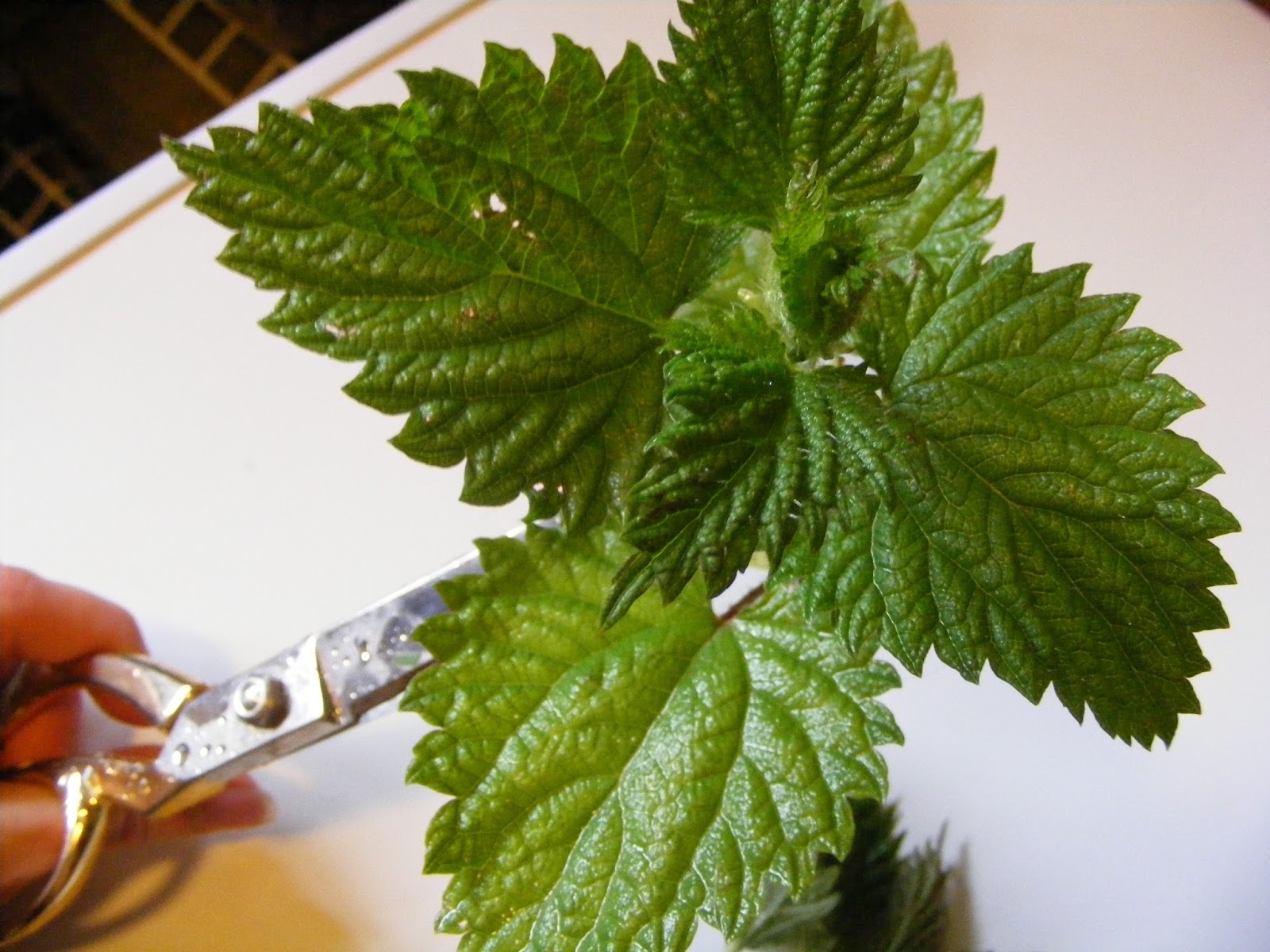 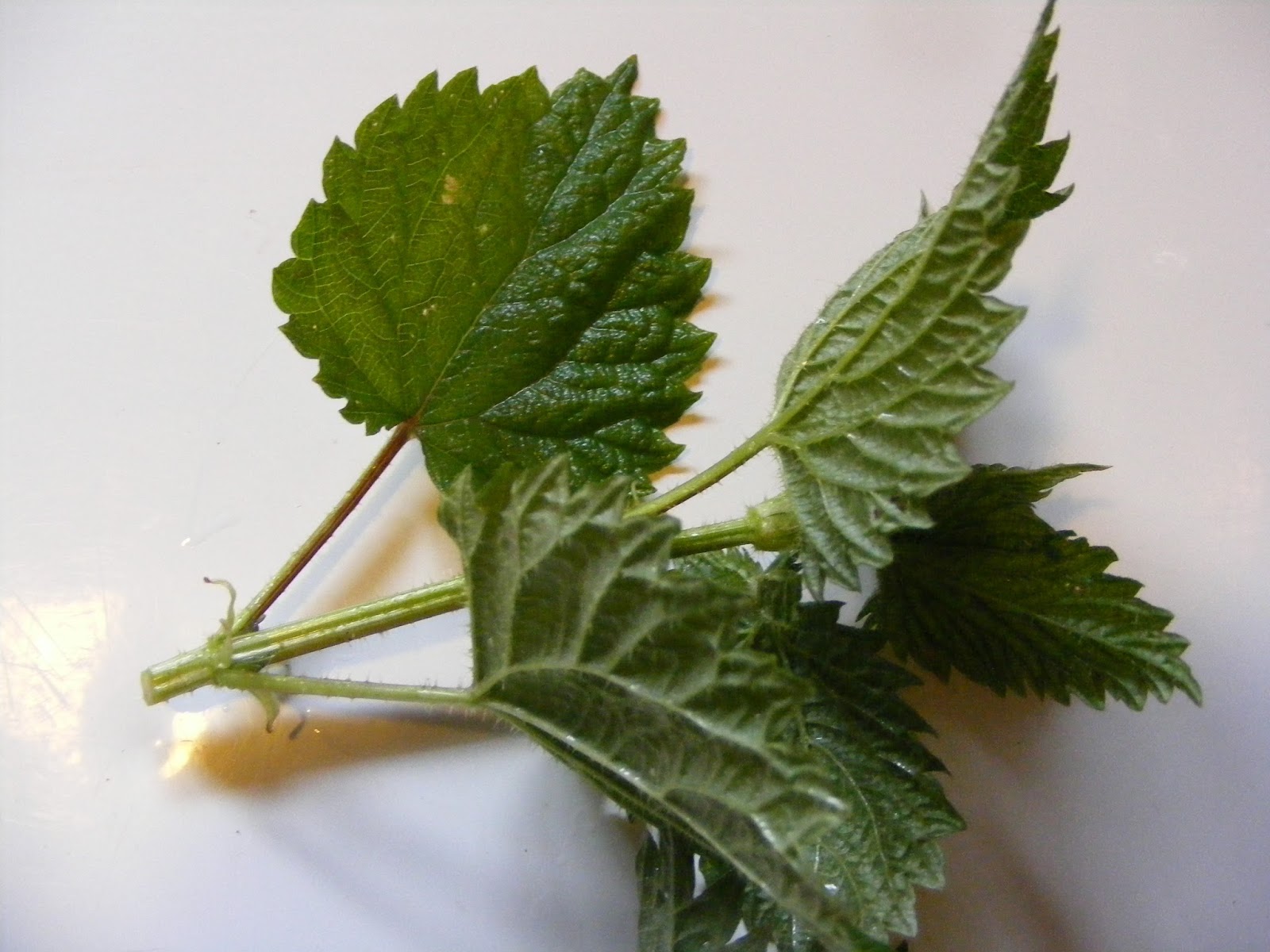 Where to find nettles?

Stinging nettles like fertile moist areas. They especially like soil rich in nitrogen and phosphorus so you will often find them in areas currently or previously used for agriculture. Alternatively, you will find them where run off from a nutrient rich area pools. These are one of the first brave green things in the spring. In a mild climate I wouldn’t be surprised if you could have them growing year round though.
They have crazy complex root systems that make them insanely hard to kill without pesticides; so why not just coexist and eat them instead? Just sayin'. 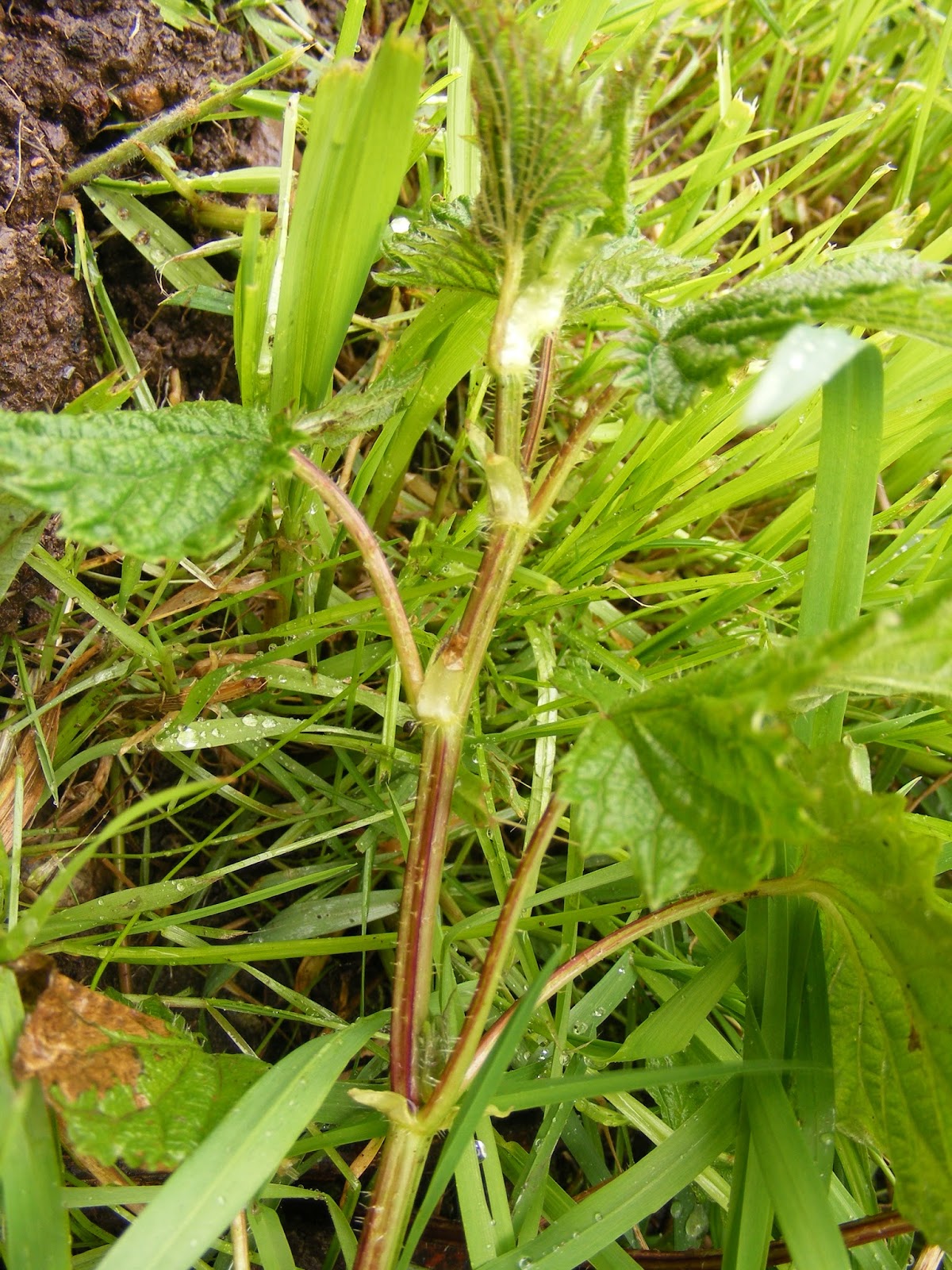 Alright, I know these are nettles. Now what?


Get yourself some garden clippers or sharp scissors and gloves if you have them. If you don’t have gloves you can use your cutting utensils carefully like tongs to get the nettles in the bowl. Oh, or hey use real tongs! I amaze even myself with my brilliant ideas sometimes.
On a different note, if you are looking for good hand pruners this brand

is awesome. If you've ever tried to work with crappy ones you know the woes of a dull edible and poor design. These puppies hold an edge, can be sharpened and repaired.

While the whole stalk/leaf part is edible I just take the top three or four segments that are the most tender, it leaves lots of leaf matter to keep the plant healthy and means I’m only getting the most tender parts.


AJ believes this rubbish about either the top or bottom not stinging, maybe you’ve heard it too? Well, with these nettles at least, no part is safe to touch. I had the welts to prove it! You can experiment with that if you want but I wouldn’t advise it.


I did notice that harvesting while it was raining cut down on how often I got stung and how much it hurt. It might have been a combination of the water preventing the chemicals from coming in contact with my skin and that I was cold so my skin reacted less. However it worked, I noticed a big difference. 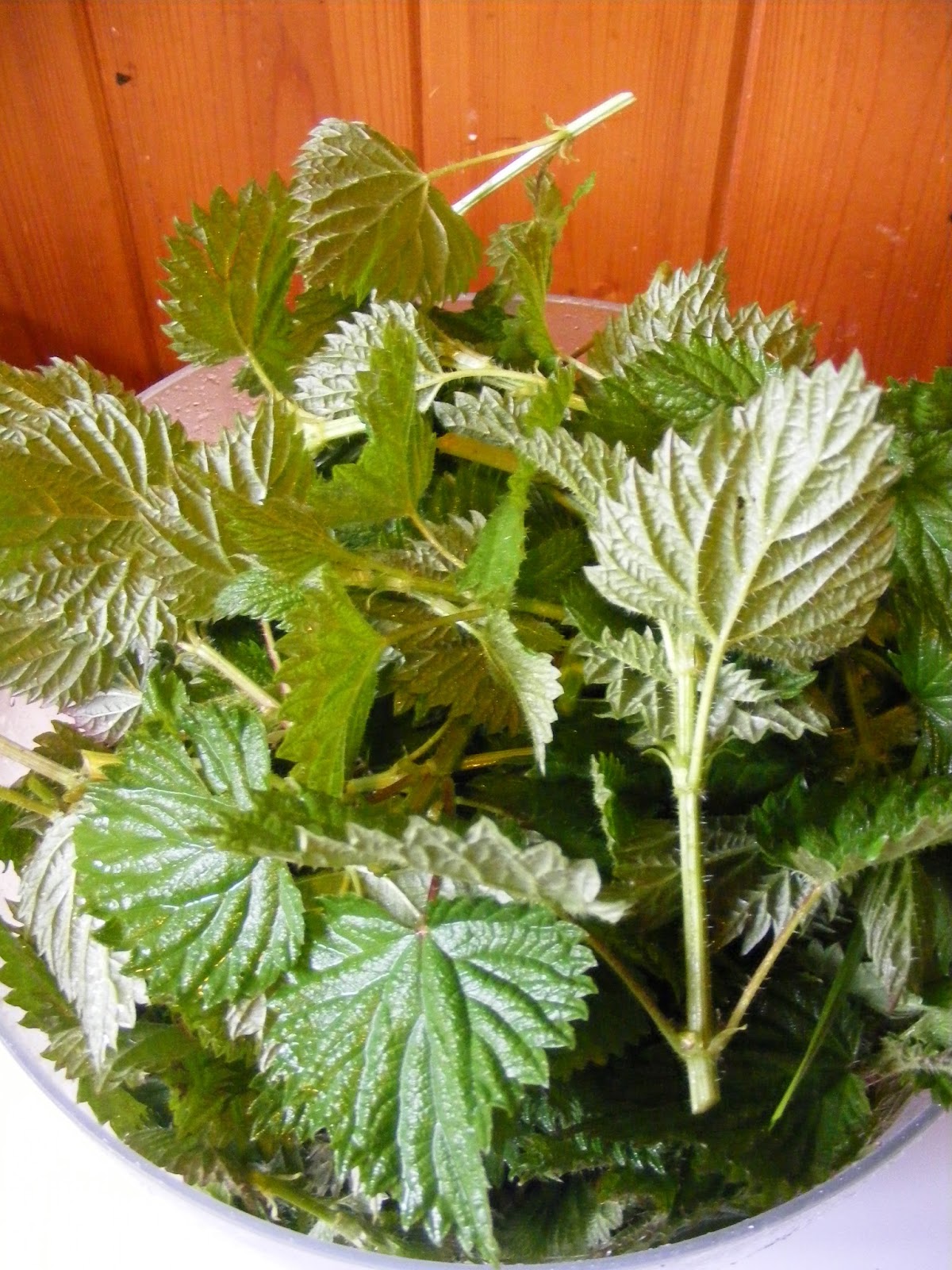 Once you have a nice big bowl or nettles bring them in and clean them. Depending on how squeamish you are about what might be on them and how dirty they look you can either just rinse them off or let them soak for a while in cold water. 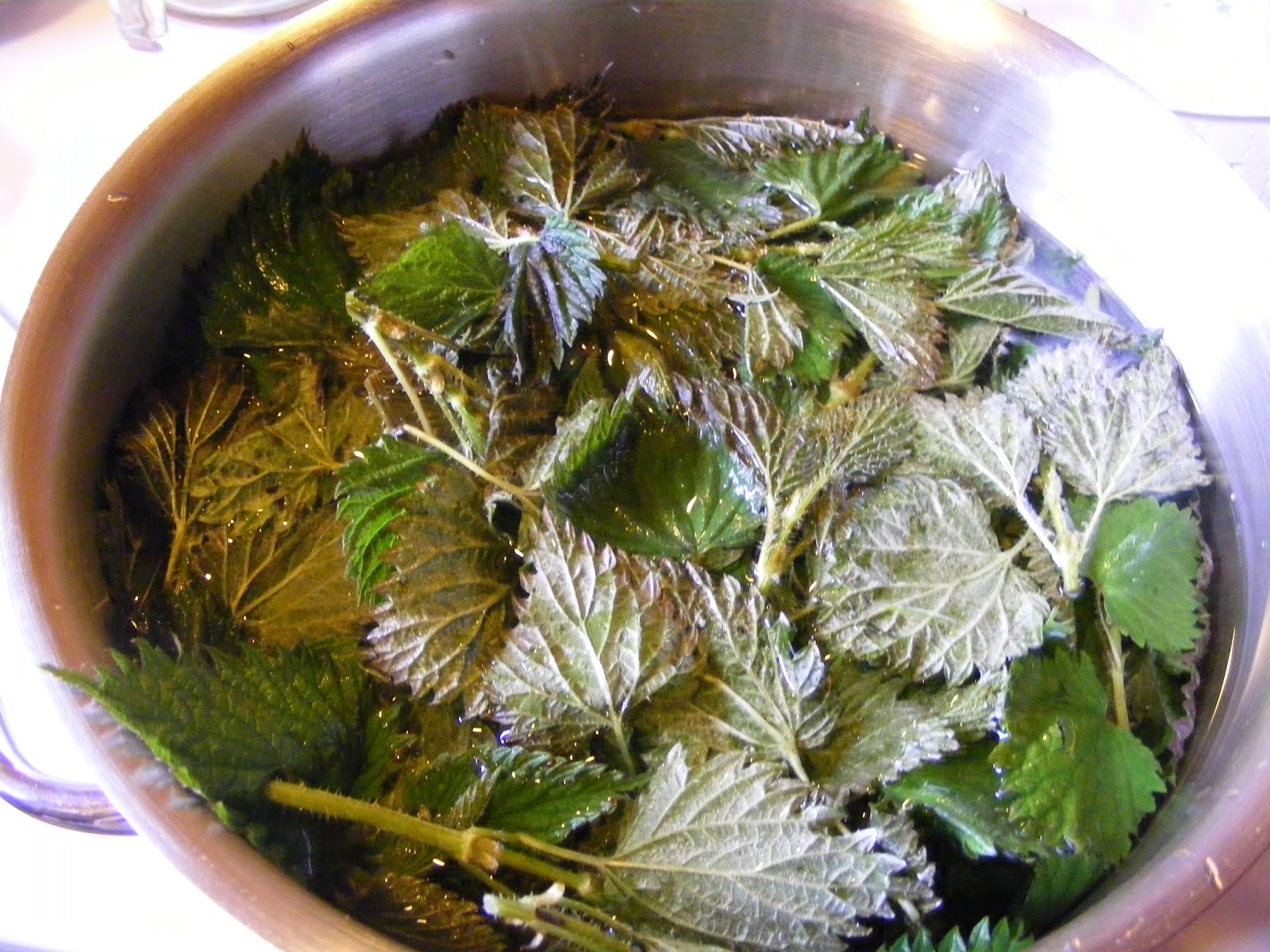 Blanching
This step is a must to kill the sting so you can eat them. You can alternatively dry them. I haven’t tried that yet but once they are dry the sting is suppose to be gone as well.
I tried two different methods.
Not because I was trying to be experimental, just because the first time I forget that I was suppose to heat the water before adding the nettles.
Opsies.
Anyhow, it works either way, with a cold water start or by adding the nettles to hot water. I did notice that adding them to hot water was faster and yielded a greener nettle at the end.
Boil a large pot of water; make sure its enough to submerge your nettles in.
When the water comes to a boil add your nettle and swish them around. I leave them in -with lots of squishes for good measure- for just a few minutes until they are wilted and bright green, and of course they don’t sting anymore. 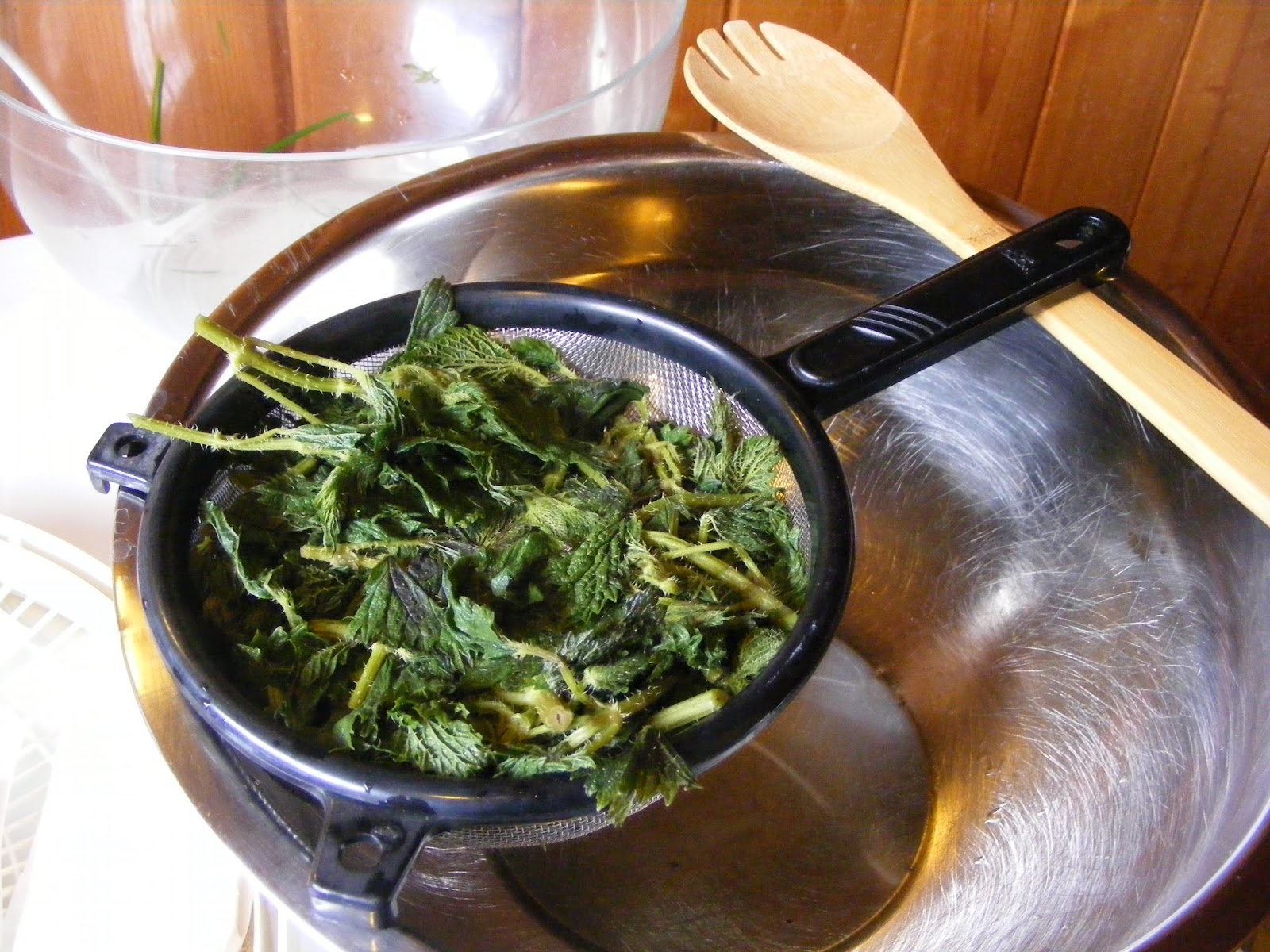 . I press the nettles to get as much liquid out as possible.
Hey, save the liquid! We will get to that here in a bit. 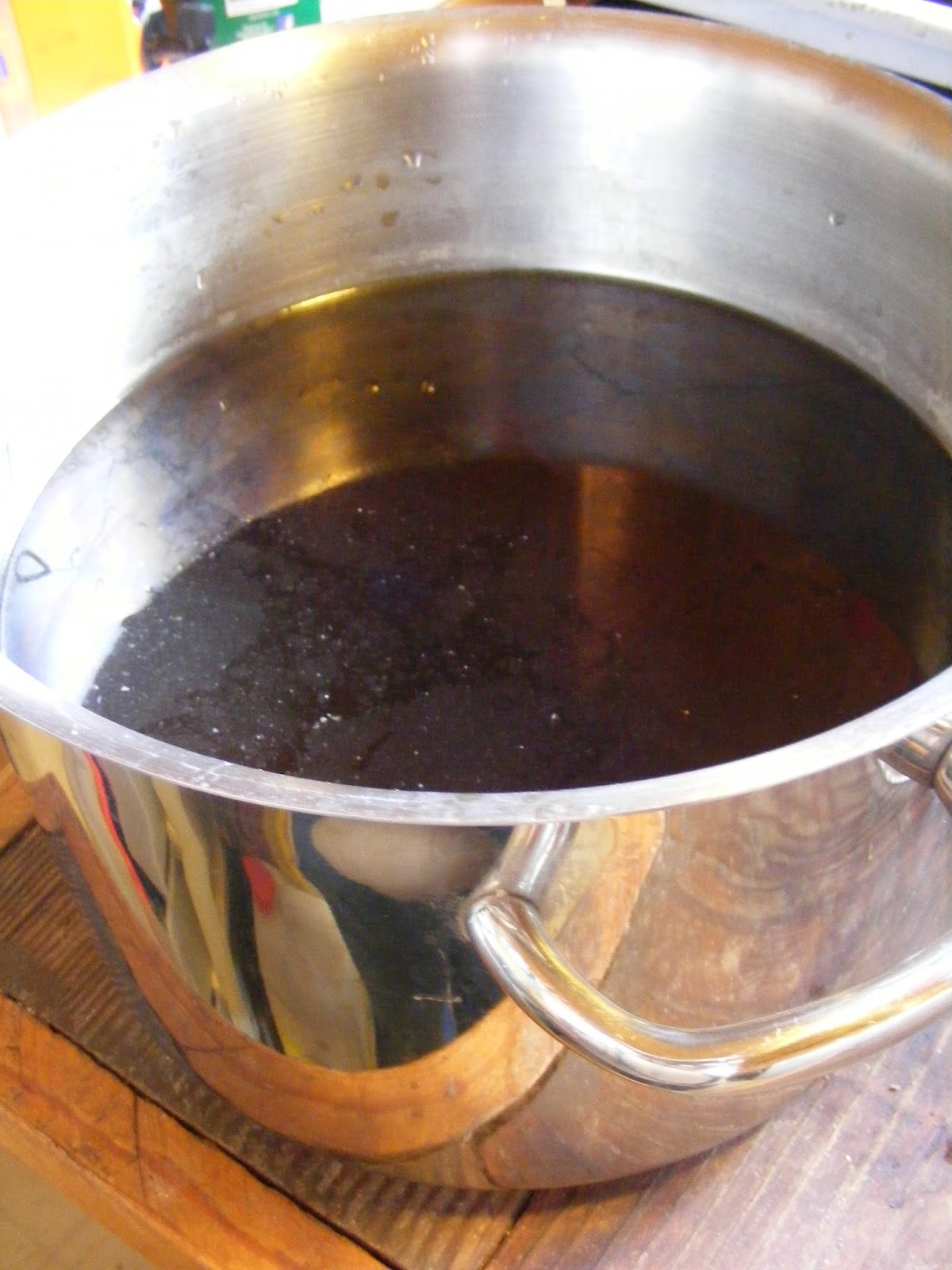 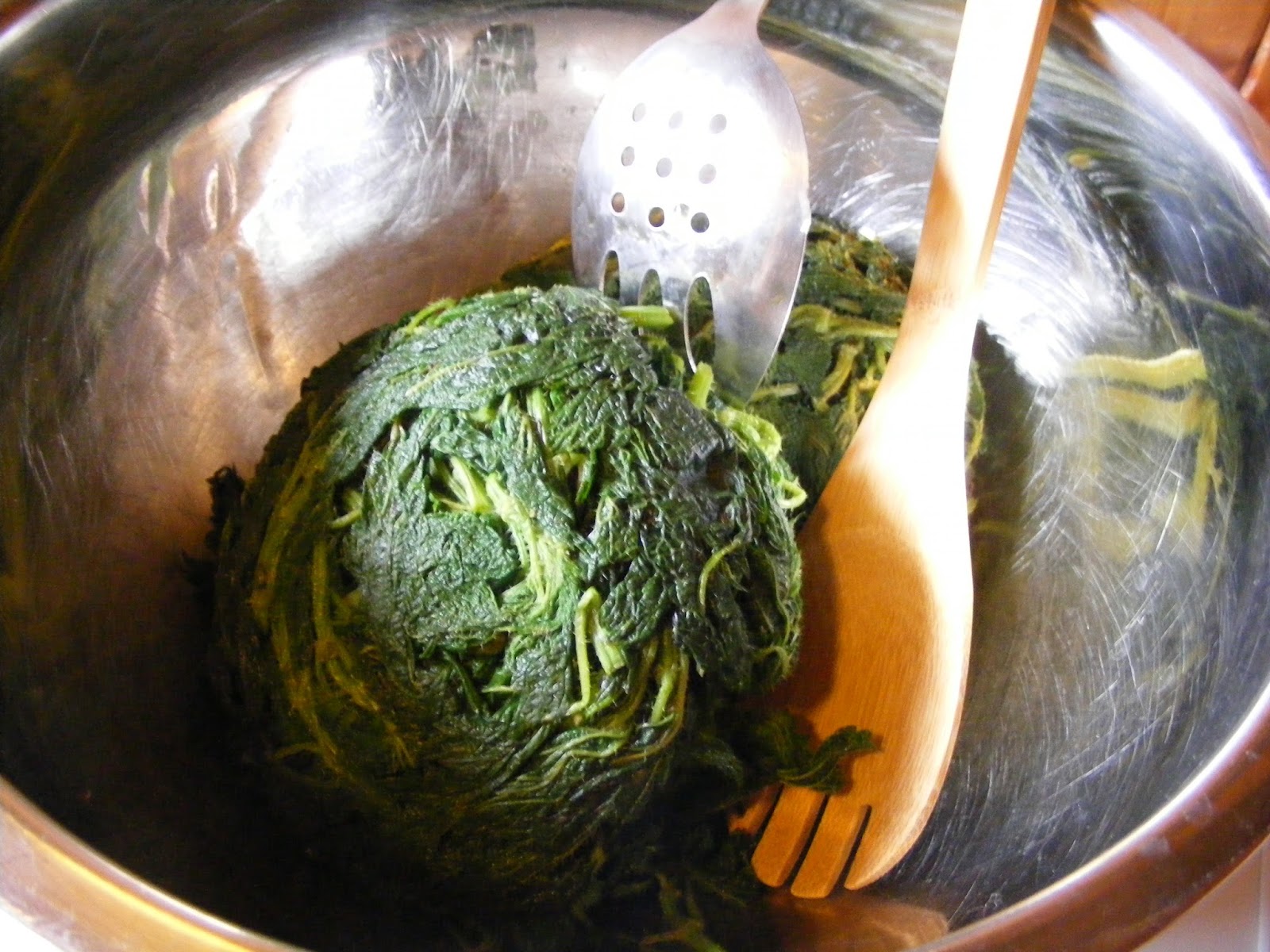 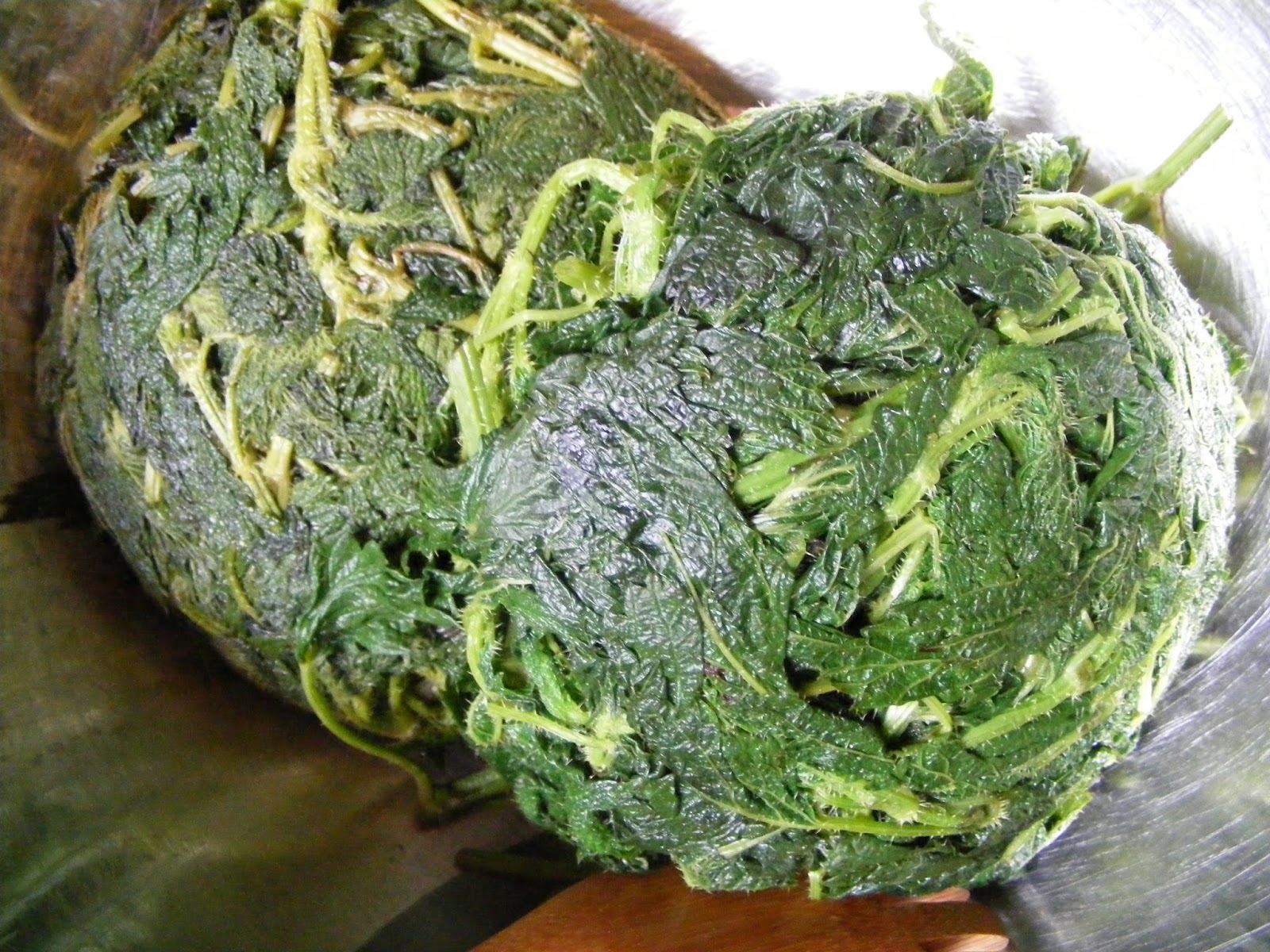 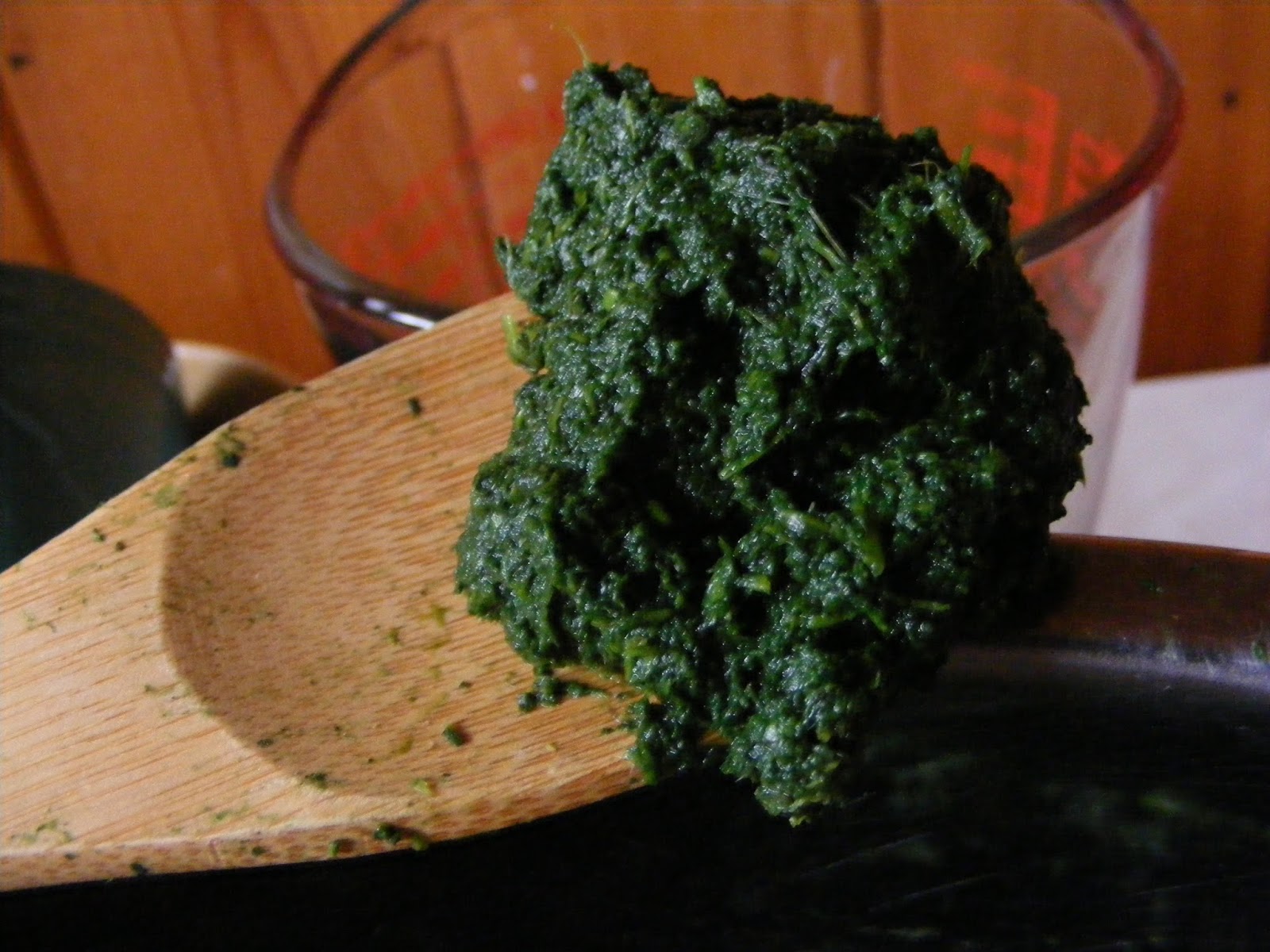 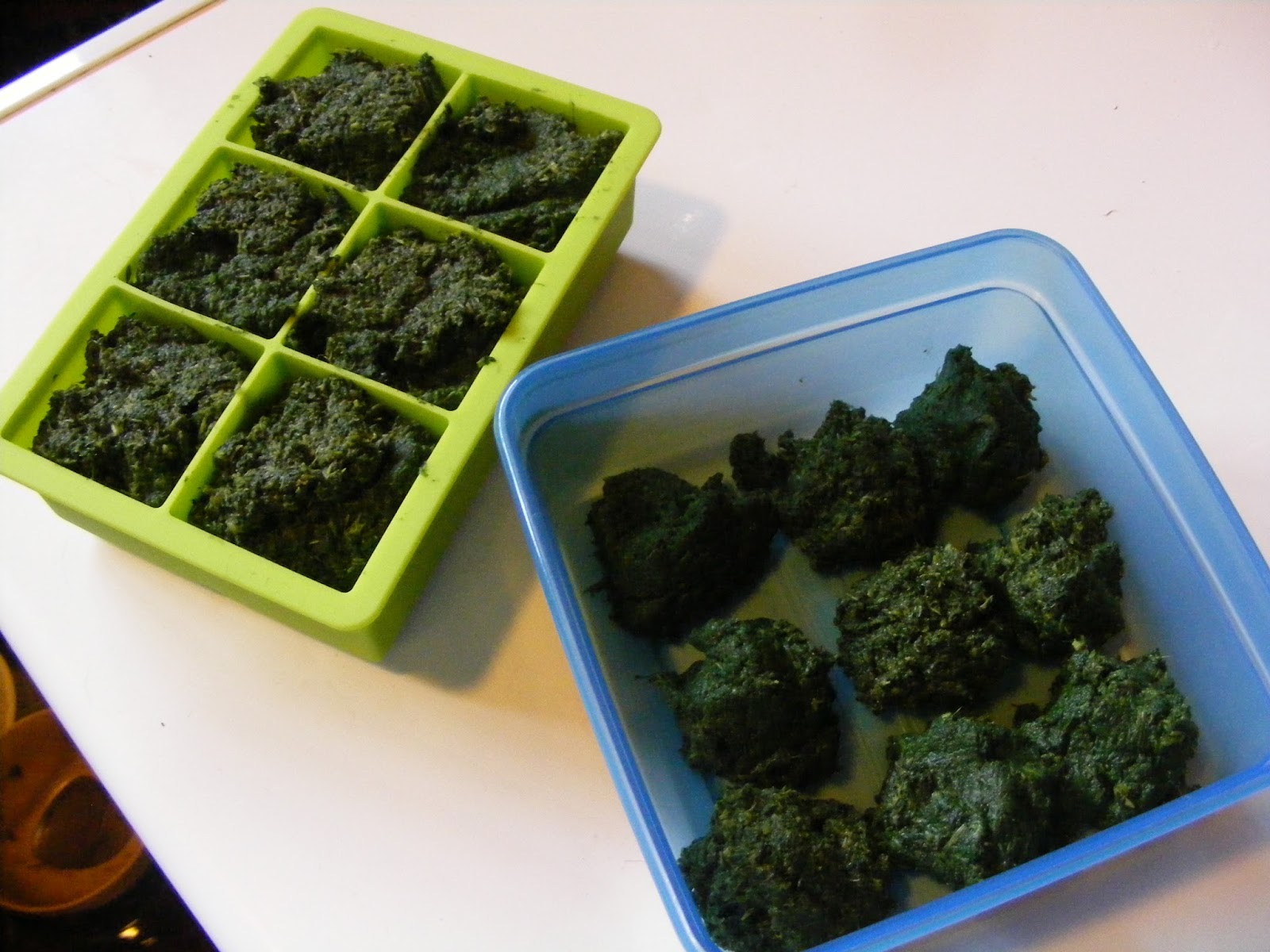 Now you can use them however you like! I pureed ours and portioned them out to be frozen for later.
Unfortunately, our freezer died just a couple weeks later. All that hard work would have been wasted but instead I made the nettles into some yummy pasta.
I think the next batch I will rough chop some as well as puree, I think they would be even more yummy roughly chopped in eggs.


That liquid you have, is often called nettle tea. I prefer nettle broth. This stuff is potent!
I feel like I’m drinking a liquefied warm day in the garden. 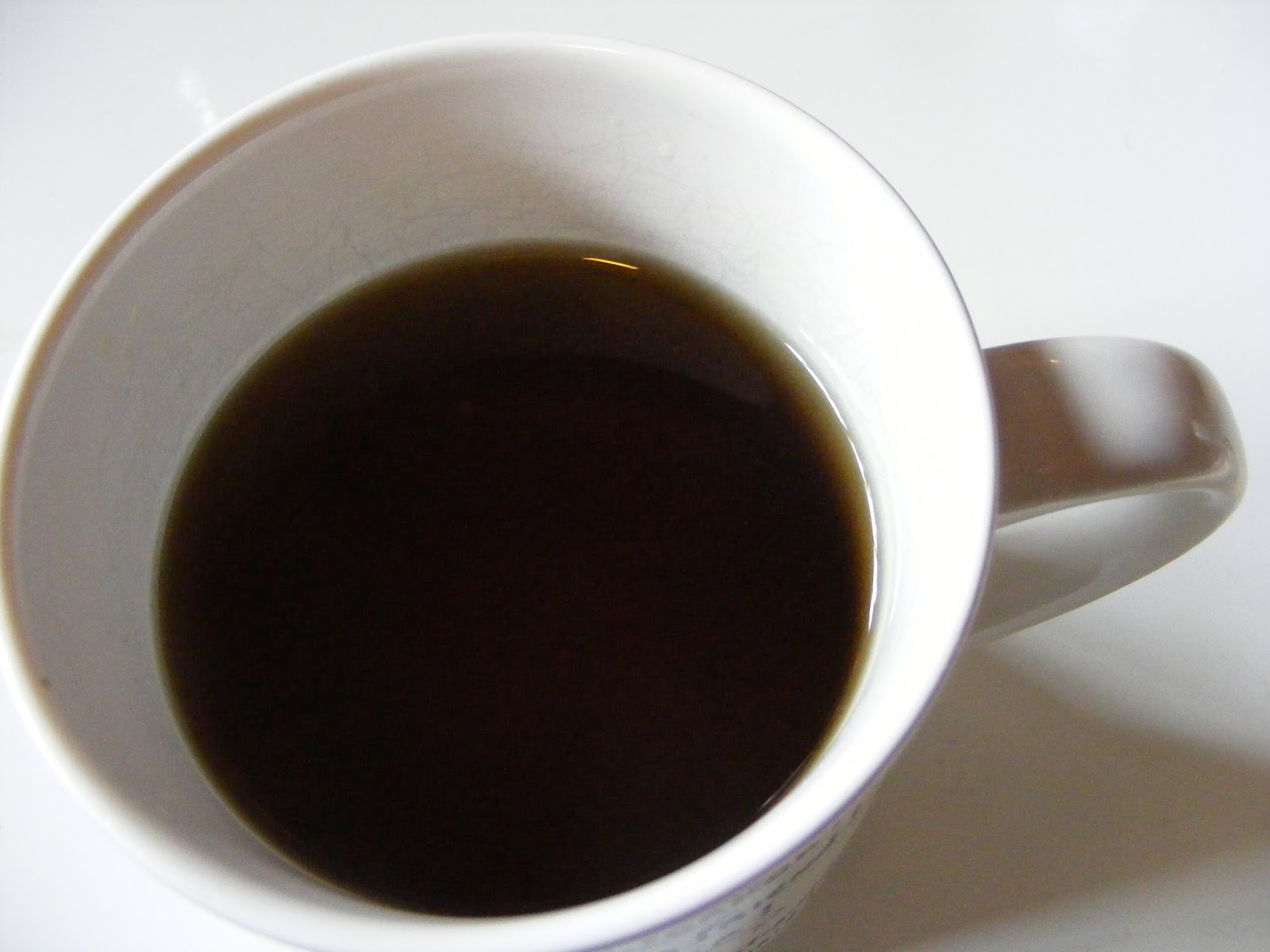 . This is the set up I use for bone broth, just minus the coffee filter. 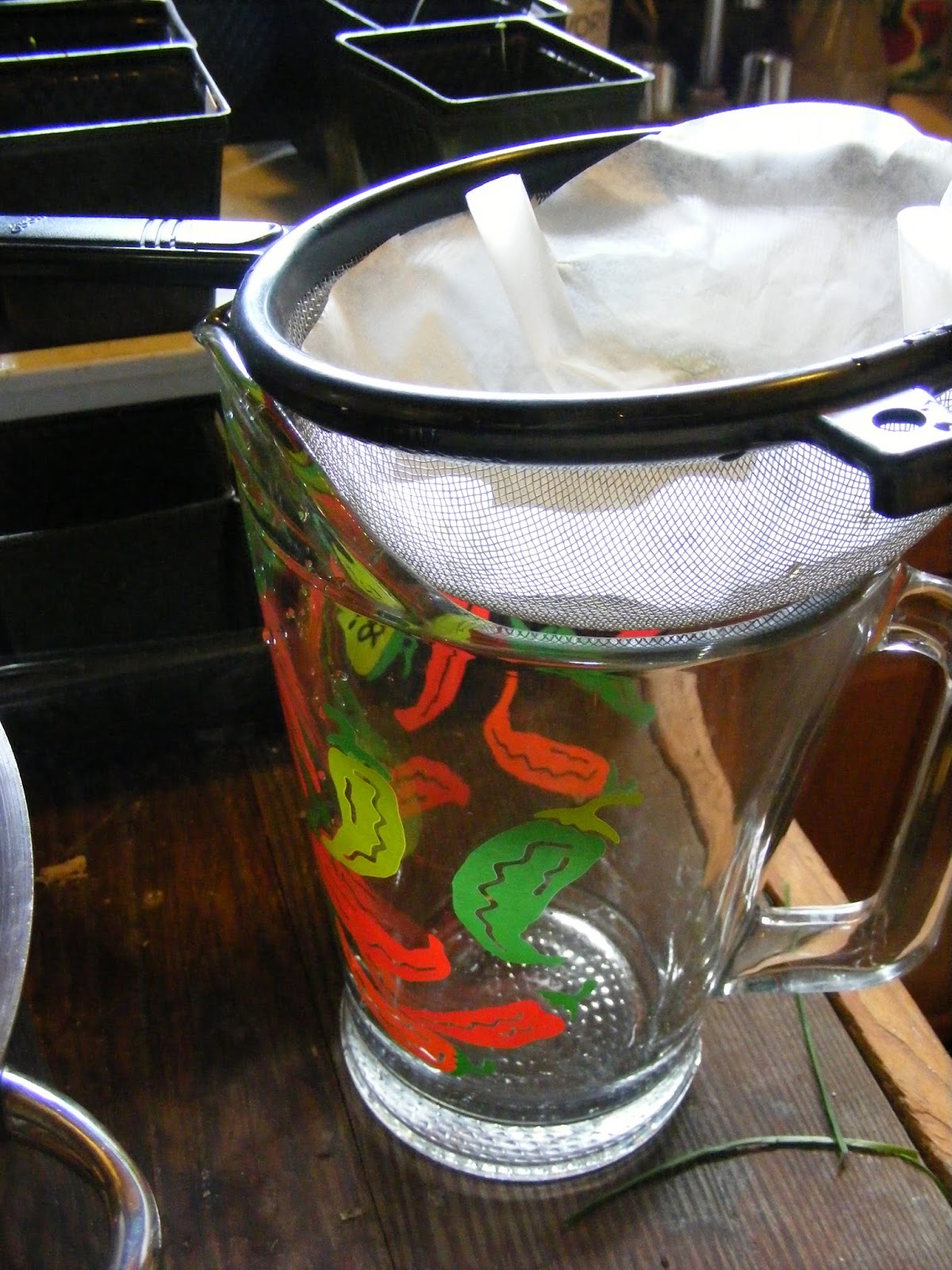 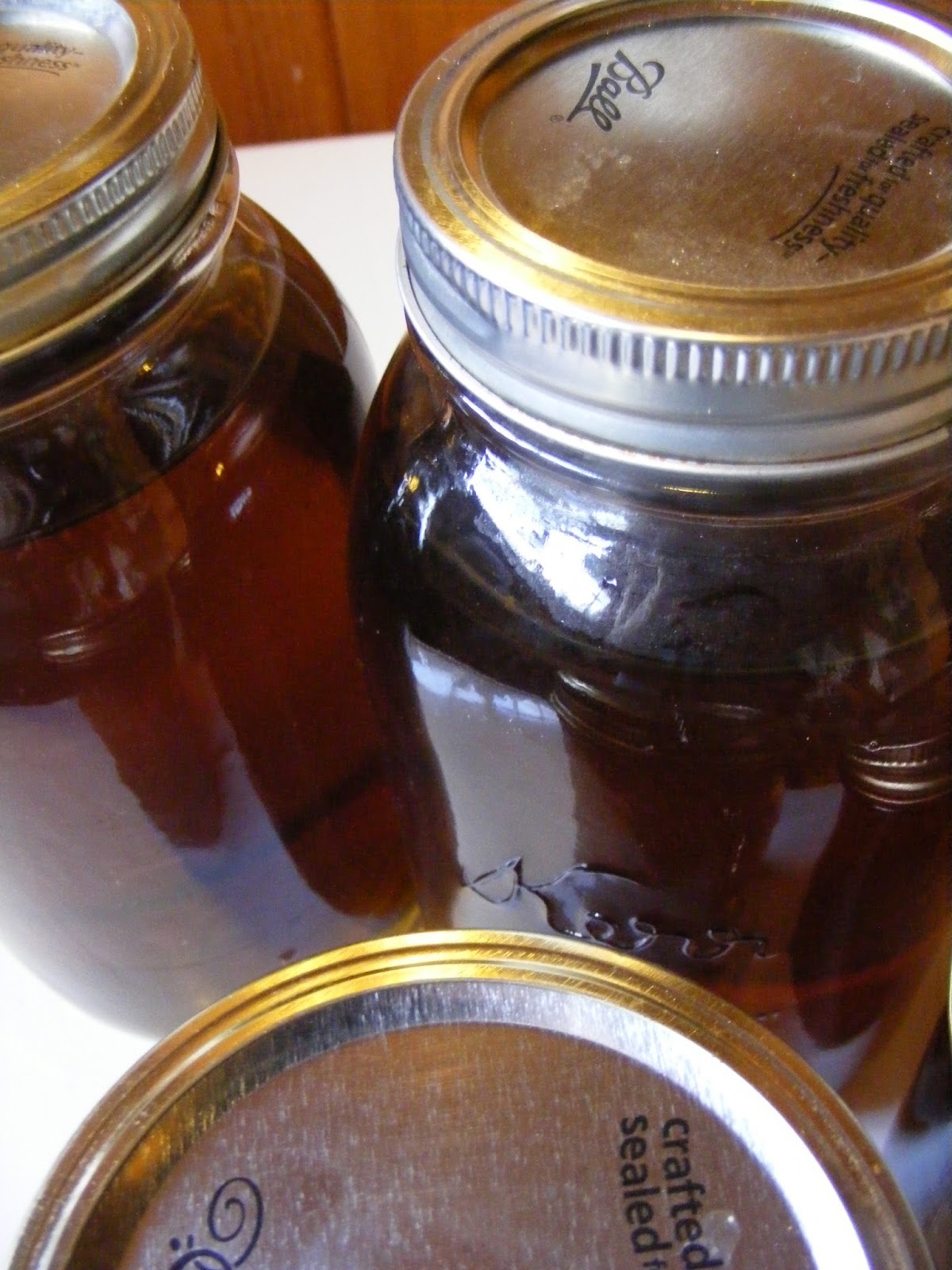 You can do all sorts of things with it, brew nettle beer or sweeten it like tea. I’m honestly a little suspicious about sweetening it since it seems so savory to me.  I found it makes a lovely base along with some bone broth for soup.It also freezes very nicely too.


Don’t forget that you can use the greens just like you would any other green that holds up well to cooking. The sky is the limit my friends!


I want to know! What have you done with nettles? 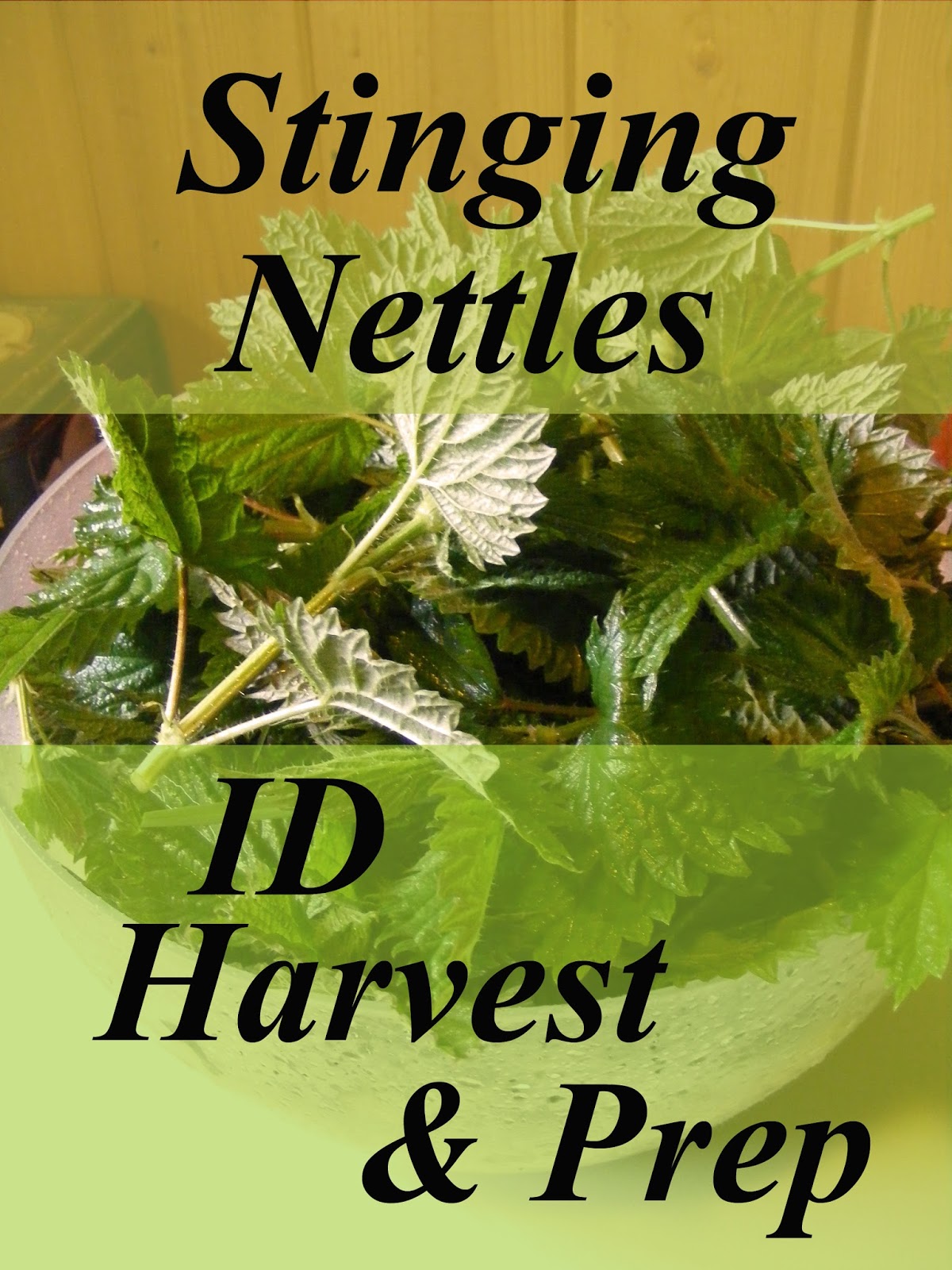 This post is participating in the Homestead Barn, HomeAcre,  From The Farm, Thrifty Things Friday, Inspired Weekends, Savoring Saturdays, Homesteaders and Mostly Homemade Mondays blog Hops, check them out to find other great blogs like ours!

Add to the conversation!

Get All The Latest Updates Delivered Straight Into Your Inbox For Free!